Of the 750 billion allocated by Europe, as much as 25.5% will go to Italy, adding the RRF fund and the REACT-EU we will have a total of 235.12 billion euros available.

The PNRR is divided into six Missions and 16 Components.

The six Missions of the Plan are:

The principal part of the funds concerns digitalization and the transition to green models. In particular, the funds allocated for technological innovation represent the greatest challenge for our country. Over the years, Italy has accumulated a considerable delay in this field that has led it to cover the 24th place out of 27 in the DESI index – Digital Economy and Society Index.

Bridging this gap would mean returning to compete with the most digitally advanced nations. An opportunity that we cannot miss. As for the approval of the first tranche of resources, according to the latest updates dating back to early December, the Italian government has completed 35 of the 51 milestones agreed with Europe by 2021. There are therefore 16 objectives to be achieved by the end of the year to receive the second part of the funds allocated to our country. Investments for technological and digital innovation amount to about 40 billion and mainly concern PA, tourism, education and health.

Blockchain, IoT, Cloud, AI, Machine learning, are just some of the technologies to leverage. As for the blockchain, although it has been decided to focus on more widespread and less innovative technologies – such as the Cloud – it is necessary to know that its application in these contexts can be transversal and bring numerous advantages.

Thanks to it, it is possible to manage a huge number of data transactions, decentralized in multiple databases that track all the steps in a secure, transparent, certified and non-tampering way.

Innovating means speeding up processes, simplifying procedures and increasing competitiveness. Blockchain is a perfect ally in digital transformation, an opportunity for those seeking solutions to certification problems, reducing security risks and costs while increasing user trust.

In terms of digitization, the areas that the blockchain can cover are multiple and applicable to the different areas of the six missions of the plan. Therefore, although the PNRR does not specifically provide for a vertical use of the blockchain (mentioned only in e-procurement field) it can be implemented in all those areas that provide funds for digitization with direct projects.

More than focusing on a large-scale model, it is time for small realities – such as Municipalities, Regions, micro-communities – to dare and launch themselves into real innovations, leading the way in a PA that is struggling to keep up with the times, but that now more than ever has the great opportunity to look at small models of excellence to make a qualitative leap.

OPPORTUNITIES FOR THE DIFFUSION OF BLOCKCHAIN TECHNOLOGY

The Government estimates that the investments envisaged in the Plan will have a significant impact on the main macroeconomic variables. The PNRR could really mark a turning point for Italy, and for the adoption of blockchain technology. It is an opportunity to accelerate its spread and use, with numerous benefits for all.

The Government’s interest in these issues and in particular on these technologies is also underlined by the recent Ministerial Decree of the MISE, which has set up a fund of 45 million euros to facilitate companies that will propose new projects for the construction and adoption of technological systems, using cutting-edge technologies such as blockchain, artificial intelligence, Internet of Things and other new forms of technology.

The loans are mainly reserved for activities located in Abruzzo, Molise, Campania, Basilicata, Calabria, Puglia, Sicily and Sardinia, but extend to institutions and companies throughout the national territory.

Specifically, the Fund will finance:

Italy is at a crucial moment in which it must “combine imagination, design skills and concreteness, to deliver to the next generations a more modern country, within a stronger and more supportive Europe” as stated on several occasions by Premier Draghi.

What is the Metaverse and how it connects to the Blockchain 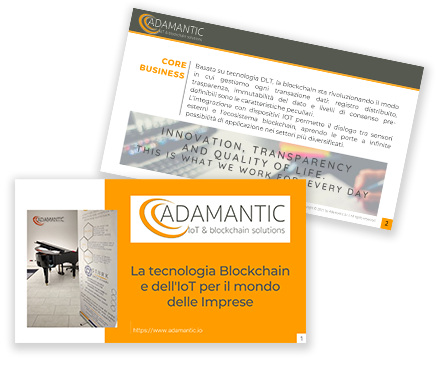 © 2017 Adamantic. All rights reserved
We use cookies on our website to offer you the most relevant experience by remembering your preferences and repeat visits. By clicking on "Accept all" you consent to the use of ALL cookies. However, you can visit "Cookie Settings" to provide controlled consent.
Cookie SettingsAccept All
Manage consent

This website uses cookies to improve your experience while you navigate through the website. Out of these, the cookies that are categorized as necessary are stored on your browser as they are essential for the working of basic functionalities of the website. We also use third-party cookies that help us analyze and understand how you use this website. These cookies will be stored in your browser only with your consent. You also have the option to opt-out of these cookies. But opting out of some of these cookies may affect your browsing experience.
SAVE & ACCEPT